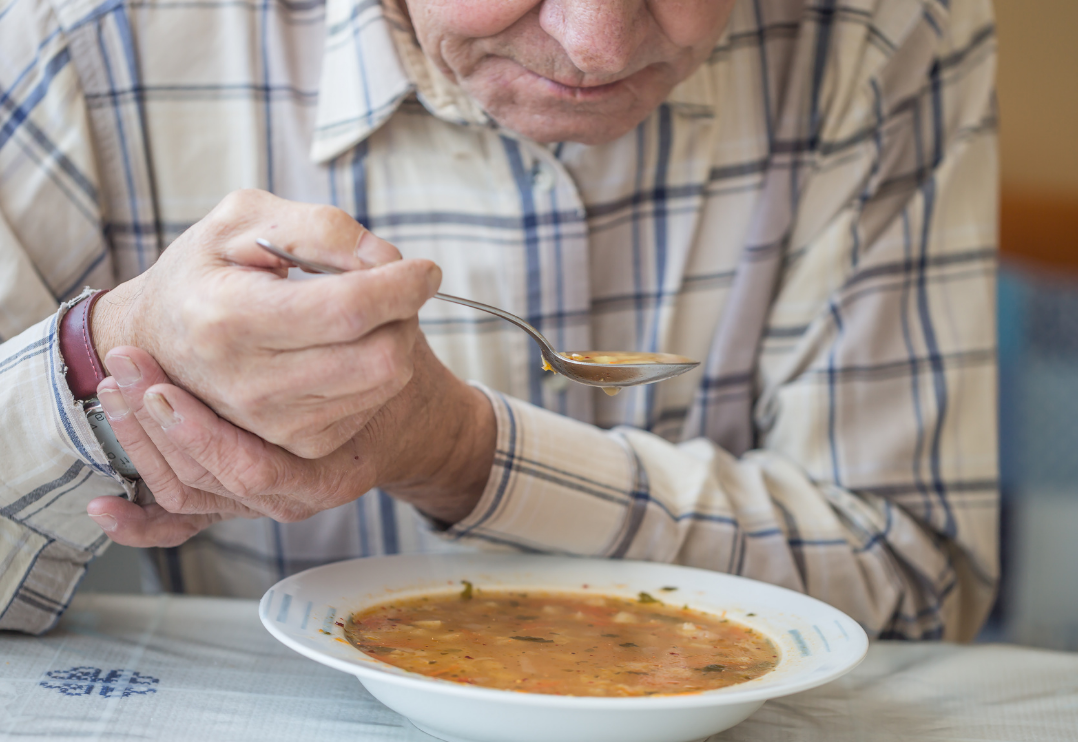 Waad is a PhD student in Rehabilitation Science, her research is focusing on dysphagia in Parkinson's disease. During her undergraduate training as a Speech-Language Pathologist, she developed an interest in dysphagia. Her aim is to understand patient experiences, empower patients, and explore ways to improve the quality of life and quality of healthcare provided.


There are some symptoms associated with Parkinson’s Disease that you might recognize as being fairly common. These include slow movement and short shuffling steps, a masked face, and shaking at resting positions. What we often do not think about, however, are the swallowing problems (dysphagia) that might not be recognized unless we see drooling or hear coughing or choking when someone is eating.

To begin, what is normal swallowing?

Swallowing is a vital function for providing us with necessary nutrition and hydration. It also is highly related to our social needs, as most social gatherings, events, and activities involve a drink or a meal. We likely never think about it when we are eating a meal, but swallowing is complex. There are many muscles and nerves in the head and neck region that work together so that you are able to swallow smoothly and safely. Any disturbance of this process can lead to an impairment of swallowing, and is referred to as dysphagia.

Why does dysphagia occur in Parkinson’s Disease?

There are multiple reasons related to nerves and muscles that contribute to the presence of dysphagia in Parkinson’s Disease.

Having an intact nervous system is important for being able to feel what is happening when eating. When swallowing is disrupted, food and liquids might “go down the wrong way” and be inhaled (aspirated) into the lungs. When this happens, the body’s normal response is to cough forcefully to clear the food/liquid when it hits the airway. However, in Parkinson’s Disease, the sensory nerves that detect inhaled materials can be impaired. Because of this, the cough reflex is often impaired. This can result in silent aspiration, which means that saliva, liquids or food particles go into the lungs without a person feeling it. With reduced sensation in other parts of the oral cavity and throat, people with Parkinson’s Disease also might not realize that they are experiencing other dysphagia symptoms.

From a muscular perspective, movements during swallowing are quick and timely to safely pass food/liquids through the mouth and into the esophagus and stomach. Bradykinesia (slow movement) is one of the cardinal motor symptoms in Parkinson’s disease. When the swallowing muscles act slowly, it may lead to incoordination of the normal swallowing process, and delay airway closure and protection. This is another reason why liquids and food may go down the wrong way and into the lungs. Hypokinesia (decreased movement) is another symptom in Parkinson’s Disease. This may be associated with difficulty in chewing food, incomplete closure of the lips to keep food/drink in the mouth, reduced larynx (voice box) elevation as required to close the airway, and a reduced squeezing motion of the throat to move food into the esophagus.

What are the common symptoms of dysphagia in Parkinson’s Disease?

Take note if you or your loved one present with any of the following:

What are the consequences of having dysphagia in Parkinson’s Disease?

People with Parkinson’s Disease who experience dysphagia commonly report disrupted physical and psychosocial functions affecting their quality of life. When swallowing becomes difficult, tiring, and lengthy, people might reduce their food intake and avoid specific foods or liquids. This can lead to unintended weight loss, dehydration, and malnutrition. Moreover, aspiration of liquid or food particles into the lungs might contribute to aspiration pneumonia (lung infection). This is a leading cause of death in Parkinson’s Disease4,5.

Swallowing is a daily activity that is usually pleasurable and accompanied by social events and activities. Difficulty swallowing and controlling saliva, and requiring longer times to finish a meal while dealing with the fear of coughing or choking can make people with Parkinson’s Disease feel anxious, embarrassed, and can affect quality of life.

Some people may experience reduced joy in eating or drinking and avoid eating in public6–9. Dysphagia also may require significant lifestyle changes for people with Parkinson’s Disease and their caregivers, and may increase the caregiver burden.

We also need to consider that Parkinson’s Disease has a wide array of symptoms, challenges, and side effects of its treatment that also may have an effect on swallowing. Some of the symptoms that people with Parkinson’s Disease may experience are cognitive impairments, depression, anxiety, apathy (loss of motivation), and fatigue. All of these may impact different aspects related to the act of swallowing such as grocery shopping, meal preparation, and self-feeding skills.

If you think that you or your loved one have dysphagia, or have some concerns about swallowing, share these concerns with your primary care physician or neurologist. A referral to a speech-language pathologist (S-LP) should be made as necessary.

The S-LP will first administer a swallowing assessment to confirm and detect swallowing abnormalities that may or may not be visible on the outside. A swallowing treatment plan is then designed by the S-LP for each person, based on their swallowing deficits. The primary goal of swallowing therapy is the safe intake of liquids and food to remain hydrated and nourished. Along with the S-LP, a multidisciplinary team may participate in improving swallowing. This may include physicians, dietitians, nurses, occupational therapists, and physical therapists. Caregivers also play an essential part in dysphagia treatment.

Dysphagia treatment in Parkinson’s Disease also involves rehabilitative and compensatory techniques. Rehabilitative intervention targets muscular exercises for the laryngeal, respiratory, and orofacial muscles. These exercises are planned to strengthen muscles for swallowing, improve swallow coordination, improve breathing/swallowing coordination, and to create a more efficient cough to protect the airway. Compensatory techniques include modified postures during meal intake, to alter the swallow more safely. Diet modifications also may be considered for a safer swallow and reduced risk of aspiration. These include modifications to the texture, temperature, or taste of liquids and food.

Since Parkinson’s Disease is progressive, swallowing requires continuous follow-up for monitoring and assessments. Changes to intervention strategies may be undertaken to maintain swallow function.

There is hope, and there are many ways to bring joy back to eating, even when there are limitations. The first step is to communicate with your S-LP, discuss the use of technology to help with swallowing exercises or enhance respiratory muscle strength and capacity for a forceful throat clear. Navigating through the continuously advancing treatment plans available for maintaining healthy swallowing is worthy.

← Prev: Dysphagia in the NICU - A Parent’s Perspective Next: Dysphagia: the physical, the mental, and the social  →

Symptoms of Dysphagia in Breastfed Infants Images of parents happily breastfeeding their infants, smiling as they look...

Dysphagia and Challenges with Oral Health

We’ve all been there before: you're sitting at the dentist's and can sense the burning question about to be asked,...

A Caregiver’s Guide to Dysphagia

If your loved one has been recently diagnosed with dysphagia and you have inherited the role of caregiver for the...